by Jude Gallegos, a girltalk. contributor

Being in college often comes with the feeling that every little decision you make will determine the rest of your life. We are afraid of making mistakes, making the wrong decision, and are in a rush to get as much done as possible. My hair stylist Miki chose to share her story on the topic. 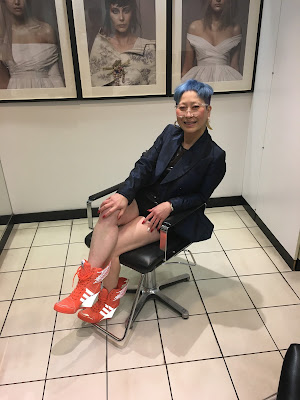 What brought you to the U.S?
Actually I was conceived in New York,so my parents met in New York. So that was my thing growing up, I was always curious to come into the United States. And I didn’t have any specific goal or anything, I just wanted to see where they met, know the history. It was more of going to school temporarily, to see if I like it but I was eventually going to go back to my hometown and help my mom’s business. But you know, it didn’t happen.

Was it a scary transition moving here?
Exciting, but not scary. More like wondering, curious. Because I had no idea, no idea.

You just went with it?
Yeah!

Do you remember what first sparked your interest in hairstyling?
That was actually when I was in Japan. I wasn’t interested in the hair industry at all whatsoever. But the hairstylist I met when I was eighteen, she just changed my...life. I was very girly, I had
long hair. I didn’t want to cut it, but then when I met her she suggested to cut it. She said ‘It’s going to open up your face’ and I was like ‘I have a bigger face, I didn’t want to open it’. She said, when you hide something, the place that you hide will actually expose more. It makes people curious to see it. But when you open it, people don’t even see it. So I cut it. Before then... I didn’t want to wear any pants or jeans or anything, I didn’t have many guy friends. But after that, after I had shorter hair I made all of these new friends, I started wearing jeans and pants, my personality changed you know? I was more shy,and then after that I felt more like me, made me more strong and outgoing. And that was a Sassoon trained stylist I had met. I knew who she was, but I never thoughtof myself getting into it. And now looking back it’s like, ‘Of course I should do this!’ but you know hair came way later. I had a block between the experience I had and I went in a different direction and then I came back to this.

How long was that block before you came back to this?
Almost twenty years, maybe fifteen.

What were some unexpected challenges you had when you first came into the hair industry?
I wanted to quit a few times, I thought it wasn’t for me. It was my second big career and because of that I kept thinking, ‘I should be doing my first career, maybe I should go back, I shouldn’t do
this.’ I had a crash, it didn’t go smooth, I made mistakes. I’m a perfectionist and I was starting from Zero; it was hard. If I was fifteen years old, eighteen years old, maybe it would&#39;ve been
easier. ‘Ok first mistake, I’ve made mistakes before and I can get better.’ But in this case it was harder to just come back to it.

What did you have in your personal life that helped you push through the transitionary period?
I think there are a few people, definitely my partner, he understands me and he was open, he believed in me. Another person was my mentor who left here, Sassoon, but she was like a legend. Old time, classic hair sassoon stylist. She told me, ‘If you don’t believe in yourself, nobody will. You have to believe in yourself, and I know you can do it.’ That was my mentor, she pushed me, she believed in me. I think it helps having a mentor; it’s like a hard love. Not every mentor, but some will be hard. And you know, it hurts but you look back later and you appreciate them them most. And then I think my coworkers too; I was definitely the black sheep because mostly everybody who had started are in their twenties just out from high school or after beauty school so definitely first career, but then for me it was my second career and it’s a different attitude. I think I was more serious, maybe too serious.

How did you choose Sassoon?
When I decided to start a new career- I felt that- well the reason I decided to change my career was I felt I had enough from the restaurant business and food business and then I couldn’t create more and be more creative. But then my idea was to own my own restaurant, to be creative and do my own thing; but I wasn’t ready with the equipment at that time. So then I felt like, ‘Okay, I need to do something, I want to do something for myself’. But you know, I can’t just be sweeping the floor, I need a career. So I kind of made an opportunity for myself, ‘Ok, I have a choice; going to school? Which school can I go to? Which career can I choose?’ and you know when you’re eighteen the pressure from society and family can be a lot, but when I was deciding I didn’t have that pressure it was just me, for myself.

There’s a lot more freedom in that aspect.
But then it’s kind of hard, sometimes freedom can be harder because you have to choose, you have to have the responsibility with the choice I’m making. So I made a list of all these things I was interested in at that time and my focus was ‘I want to be me, which means I want to be happy with what I’m doing, and then be creativein something that I’m doing,and lastly something that makes me feel free and not tied down to one place. And then I made the list and ‘hair stylist’ popped out. If I can be creative, I’m interested, you know in the different shapes and all that but I never really loved
hair I just thought I could grab scissors and go. You know, I could go anywhere and cut hair. I was like, ‘this is it’. Then I start thinking, ‘I need to go to school’ and then Sassoon just *snaps
fingers* and I was like, ‘Of course Sassoon!’

If I remember correctly, you once mentioned after Sassoon school you went into styling for film and runway. Do you feel like those experiences are more valuable to you than it would have been staying with Sassoon?
Yeah definitely valuable. I definitely learned a lot from it. It was an idea from the first mentor at the school. He told me to go out there and look, to see the world. It made me even like Sassoon more; being out there seeing what other people are doing, and then what we do, I see the difference and I appreciate more of what we do.

You became an official Sassoon stylist this past year and had a runway style show for your hairstyles; how is it looking back on these milestones?
I’m actually amazed with myself, I can’t believe what I have done. And you know, I’ve had moments of quitting, and crying, and hating, and ‘Why am I here’ and all that and now I’m cutting and doing hair for clients and looking back, ‘but hairstylist wasn’t even on my list! Never!’ *laughing* And then I produced the show and it feels like there’s a tunnel with light, but then there’s more to it. It’s not an end, it’s an exciting way, not in a draining way, like a transition.

Any future goals you have, with or out of Sassoon?
I think I’d like to produce another event again. In a different way with a different vision. From my first show I learned a lot; I see all of these artists who want to be there creating a community to create this one thing, one show and all this different talent going through and participating. And all of these people never met each other and they come here and they’re making one and share all this art and creativity and it’s beautiful to see. That’s when I was impressed, not necessarily with what I did but what I brought all these people together; it was beautiful to see. And you know of course the money things are important, people want to get paid and that’s what people do but I think the artists need to have that big exciting feeling about it,it’s not about money, it’s not about time, it’s this. The people, why you do this, why you chose to do this; it makes you happy. That’s what I was most impressed by it, and that’s why I want to do it again. I can create community again.

Any advice to any young women out there in the arts, or any women starting their 2nd or 3rd career?
I would say don’t give up, do it, until you fail. It’s okay to fail at least you learned from it. But if you don’t try it, if you don’t fail you'll never know if you didn’t do it. You’d regret it more. I think it’s better you regret about a mistake than what you didn’t do.