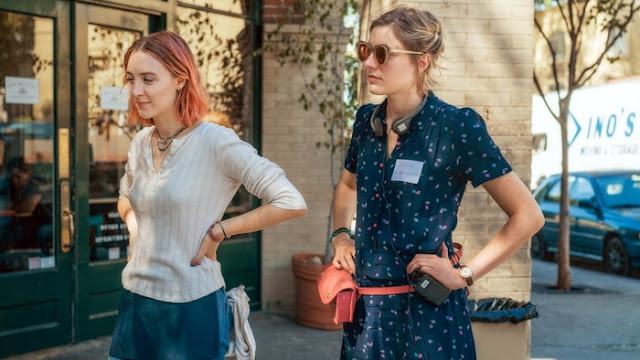 
First, I want to thank you for making Lady Bird, and pushing through your bouts of uncertainty in becoming a director to deliver such a warm and personal piece of art that will impact so many young filmmakers and women for decades to come.  Coming of age stories are rarely ever told through women and are never done in a way that generates such critical acclaim. Don’t get me wrong, some of them are still my favorite films, and truly taught me what girl power was. Lady Bird is the first realistic coming of age story (I’ve seen) about a young girl who is just like everyone else, that reached a larger audience. The amount of exposure the film got is game-changing. Now, for girls like me, the window of opportunity cracked open a tiny bit more. Lady Bird was nominated for five Academy Awards this year and although it did not take home the gold, it’s still a winner in my heart. I know it’s cheesy, but there’s no better way to say it.


I recently listened to A24’s (Please hire me..I’m your biggest fan) first podcast in which they featured you and Moonlight director, Barry Jenkins, in a conversation about how your films were created. Seriously, I cried the second it ended. The way you spoke about your desire to be a director and work behind the camera struck a chord with me. You talk about feeling not good enough and feeling as though someone else could do a better job, however, you pushed yourself to wipe away the negativity and accomplish this film.  I’m a 21-year-old filmmaker in San Francisco, California who has just written, and is in pre-production of directing my first short film. The film follows a girl in college whose just developed a superpower, and must learn to control it. I want it to empower women and explore coming of age as a young woman in your 20’s. We grow up and slowly get comfortable in our own skin only to develop and grow more as a person. We have to learn to get comfortable again and again; it’s a constant cycle.


I was so inspired by your confessions on the podcast because I feel the exact same way. I went through four years of college not knowing what I wanted to do, and convinced myself that other people would direct, write, or create better and more than I would. As I prepare to graduate this semester, I find I’m in a constant battle with myself; trying to ensure that I support and encourage myself. I need to push through and do what I want to do. I need to be excited to learn, and not insecure about my abilities. The moment you had while at the YMCA in that inspirational gym class is the moment I had when listening to you talk about the evolution of Lady Bird and how you pieced together the film. You made me feel empowered and confident in myself through your humility and experiences as a first time director.


Thank you, Greta, for putting Lady Bird out into the world. Thank you for proving that film can talk about women in relation to themselves; not having to be tied to or seen through the eyes of men. Thank you for putting so much detail into your film, and doing your best to deliver a well-crafted piece of art that has influenced me in abundant ways. I saw Lady Bird seven times in theaters and plan on going until it’s completed its run. I will continue to watch it and talk about it and urge my professors to screen it. I will take something new away from it after each viewing. That’s the mark of an excellent and timeless film. Congratulations on Lady Bird, Greta. Thank you dearly for making a film that’s like a warm and supportive hug when you need it most.